The Temple of Aphaia / Afea in Aegina Island 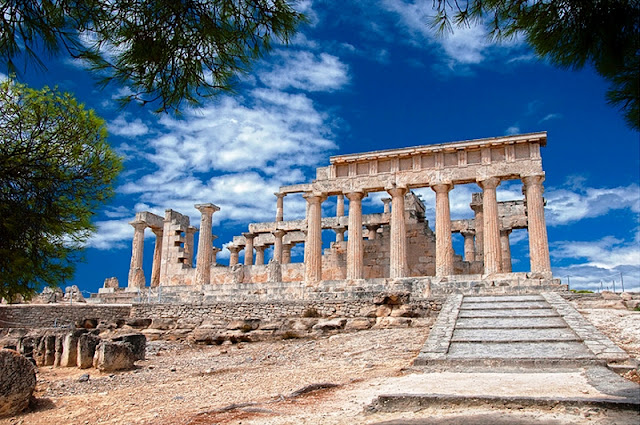 The Temple of Aphaia / Afea is arguably the jewel in the crown of Aegina island.  Whether or not you are especially interested in history and archaeology, failure to visit this outstanding monument would be a great pity.  It is a stunning example of ancient architecture set in a beautiful natural forested area with sensational views across the island to the sea.

The historical and archaeological importance of the Temple site is sufficient to motivate many to visit Aegina island for this reason alone.  Its history can be traced through various phases with the earliest being the Late Bronze Age (14th Century BC).  The discovery of many female figurines from this period indicate that the site was used for worship to a fertility and agricultural deity.  The first Temple was built around 570 BC but this was destroyed by a fire in 510 BC when the second Temple was erected, the remains of which are preserved for today.

You will enjoy the opportunity to walk within very close proximity to the Temple remains.  Indeed, many visitors comment that this is what makes their experience so special.  There are twenty remaining columns constructed with local porus stone.  Originally there were pedimental sculptures which must have been glorious to see in situ.  However, these must now be viewed at the Glypthotek which is a museum in Munich, Germany. Below you see some pictures of them.  They were discovered by Baron von Hallerstein in 1811 during his excavations with the English architect Cockerell.

The sculptures led to an initial belief that the purpose of the Temple was to worship the goddess Athena since she is the central figure.  However, in further excavations over 100 years later (in 1901), inscriptions to the local goddess of Aphaia were found.  The mythology associates Aphaia with Britomartis from Crete who was the daughter of Zeus and half-sister of Artemis.  Britomartis was pursued by King Minos of Crete who had fallen in love with her.  In order to escape his unwanted attentions she leapt into the sea but was caught in the net of fishermen who took her towards Aegina on their boat.  However, a fisherman was also captivated by her beauty and attempted to rape her.  This time Britomartis successfully fled onto Aegina and seemed to disappear into the woods.  The word Aphaia is derived from the Greek for 'invisible'.

Temple of Aphaia
The Temple site is indeed a special place with an atmosphere of tranquility and beauty.  The sunlight reflects upon the ancient pale columns and one cannot help but be impressed by a sense of our small place in the great passage of time.  What is more the Temple is positioned an equal distance from the Acropolis in Athens and the Temple of Poseidon at Cape Sounion. These three great and magnificent Temples form a triangle between North, East, and South.

If you have the time and energy, walk up the rocky road to the east of the main road to Aghia Marina, opposite where the fire truck parks, high enough to look back down at the Temple.  The view is well worth the effort.

single head
from the sanctuary of Athena Aphaia
Munich, Glyptothek

from the west pediment in an old compilation
from the sanctuary of Athena Aphaia
Munich, Glyptothek 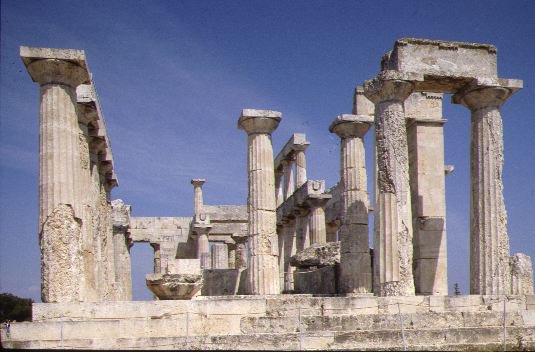 Photograph by Maria Daniels, May - June 1990 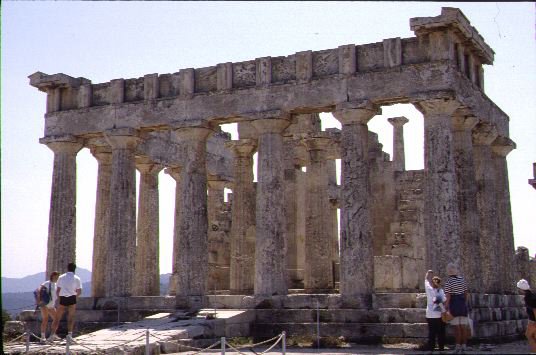 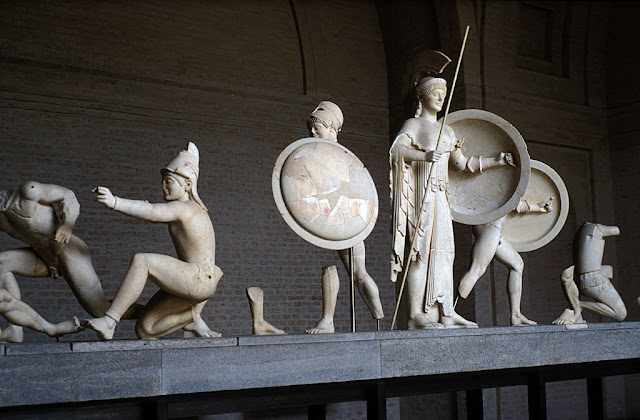