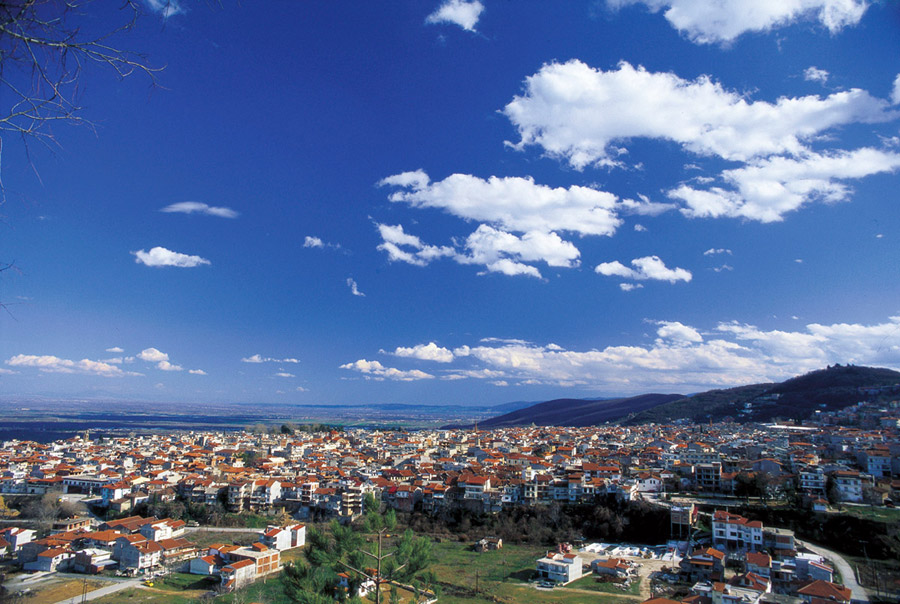 Naoussa is built in the foothills of Eastern Vermion, in a natural embrace which is shaped by successively levels that slowly descend to the plain and dominate from a medium altitude of 330 m. above the sea to the entire fertile plain of Imathia that is extended up to Thessaloniki. To the West, the horizon of the city is described by verdurous mountains and hills that create this precisely hospitable embrace, where the current city has been founded and developed.

The Vermion Mountain, that constitutes the natural border between the plain of Imathia-Thessaloniki in the East and the uplands of Kozani in the West, allows minimum obligatory crossings where the most important cities of the region can be found: Veria, the capital of Prefecture of Imathia in the South, Naoussa in the middle and Edessa the capital of Prefecture of Pella in the North. Many villages dispread among the cities ensure the continuity in the human presence. 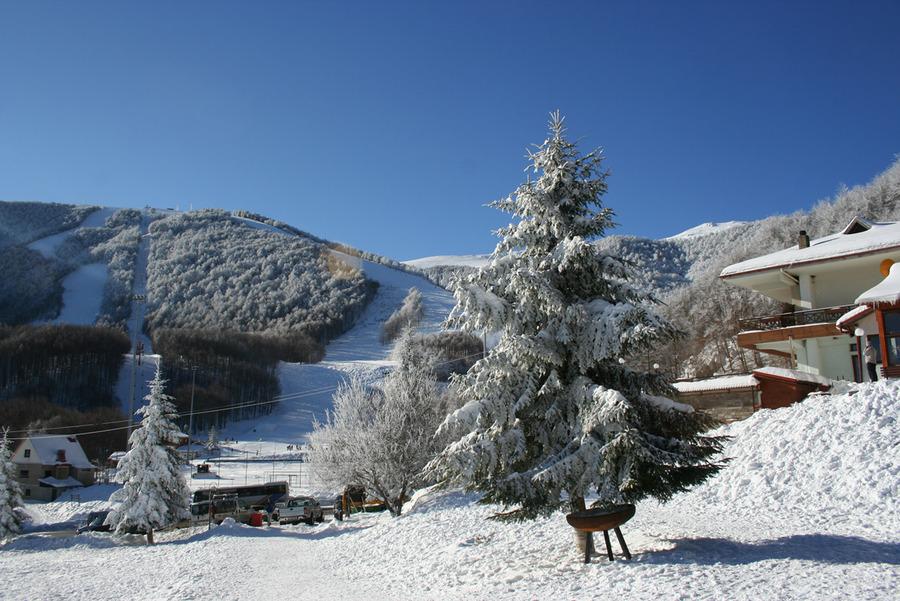 The northern and Eastern slopes of Vermion are covered by forests with mainly conifers and beeches, while the Western slopes are almost naked. The abundant water forms big and small waterfalls, which have been used since 19th century and are still used as motive force for the industry. More specifically in Naoussa, the most important river is "Arapitsa" whose sources are located in a very beautiful place near the city which is the thicket of Agios Nikolaos. Rolling to the lower levels, the river crosses the city and separates it in two unequal parts, while successive smaller or bigger waterfalls are formed in all the way up to the plain.

This particular area of Vermio, where Naoussa is found today and where Herodotus places the famous "Gardens of Midas", was inhabited from most ancient times by the Vriges, who migrated to Europe before the Trojan War. According to Thucydides and Strabo, these Vriges were persecuted by Caranus, founder of the Macedonian State, while subsequently other Macedonian tribes came and intermixed with the Vrigo - Pelasgian tribes which were left and thus comprised the population of historical times.

Extended ruins in the area between today's Naoussa and the neighbouring villages of the plain reinforce the version that contemporary Naoussa has evolved at the site of a significant city of an
tiquity, which was found between Veroia and Edessa. The name of this city, according to archaeologists' most recent views, was Mieza. According to local myth, the three children of the mythical king of the area, Veretos, passed their names on as follows: the daughters to the two important cities of Emathia, Veroia and Mieza, while the son, Olganus, metamorphosed into a river god and gave his name to the river known today as the Arapitsa. A bust of Olganus, which was discovered in the Copanos area and dates back to the 2nd century A.D., is now preserved at the Museum of Veroia.
ANTIQUITIESThe archaeological site of Mieza - better known by the name of Lefkadia - which today is included for the most part within the limits of the Municipality of Anthemia, had already been located in the 19th century by the French traveler Delacoulonche and the Dane architect K. F. Kinch, but was subject to systematic research only after 1950, with the work of curator of antiquities at that time, Photis Petsas. The existence of settlements from the late Bronze Age, the Iron Age, the Classical, and also the Hellenistic Era has been verified, the Hellenistic being the most significant from the standpoint of surviving monuments (late 4th c. -168 B. C. ). Among the many scattered archaeological findings of the area, the unique great Macedonian tombs (of Judgment, Lyson and Kallikles, Anthemia, Kinch et. al.) and the School of Aristotle in the Nymphaion at Mieza are considered most significant. Rather recently the ancient theatre of the city has come to light and the city's Agora is being excavated.

The School of Aristotle at Esvoria - Naoussa 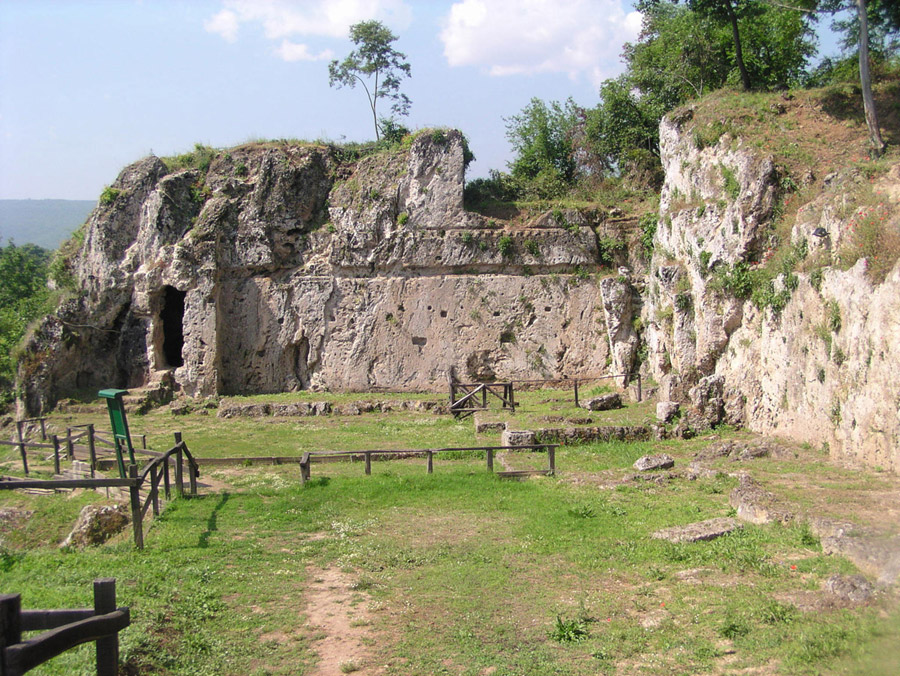 A place of universal interest, the ruins of the School of Aristotle is a short way from contemporary Naoussa, at Isvoria site. This is the place with the racing waters and the deeply-shaded caves which the ancient writers mention, where the greatest philosopher of antiquity taught the greatness of classical Greek thought and the ideals of Platonic philosophy to the son of the King of Macedonia Phillip II, Alexander, and the other nobles of the Macedonian court. The encounter of these two greatest personalities of the ancient world at the Nymphaion of Mieza, of Aristotle, the scientist, with the great military commander, Alexander, would definitely affect the future of mankind, and of all Western Civilization. 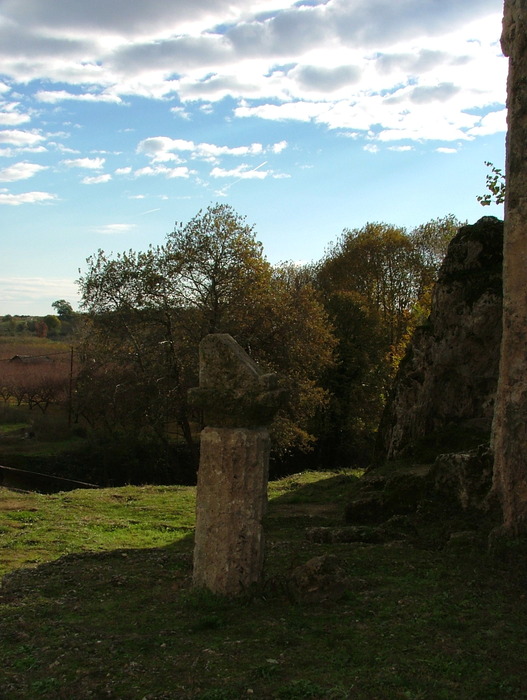 The area which the Nymphaion, the sanctuary dedicated to the Nymphs, occupies is a very impressive natural landscape, where the ancient relics -the wall prop of a two-floor arcade of Ionic columns forming a Π is preserved- combined with the three natural caves which are found there constitute the main grounds of the school. The vertical surface of the rock, where the openings for supporting the roof's girders are discernable, comprised the back-end of the shady porch (stoa), (350 B. C. and after), where Aristotle taught "the ethical and political word" (Plutarch VII, 668) to the Macedonian nobility's young offspring. At the Archaeological Museum of Veroia, tiles and clay pugs from the porch (stoa) roof are on display. The landscape where the Master rambled with his students on the riverbanks, full of paths with dense vegetation, while surrounding cool streams gushed from the springs and serenely flowed, is complemented by an even greater cave a little further off, with two carved entrances, and a distinct devotional use.

The ancient Theatre of Mieza 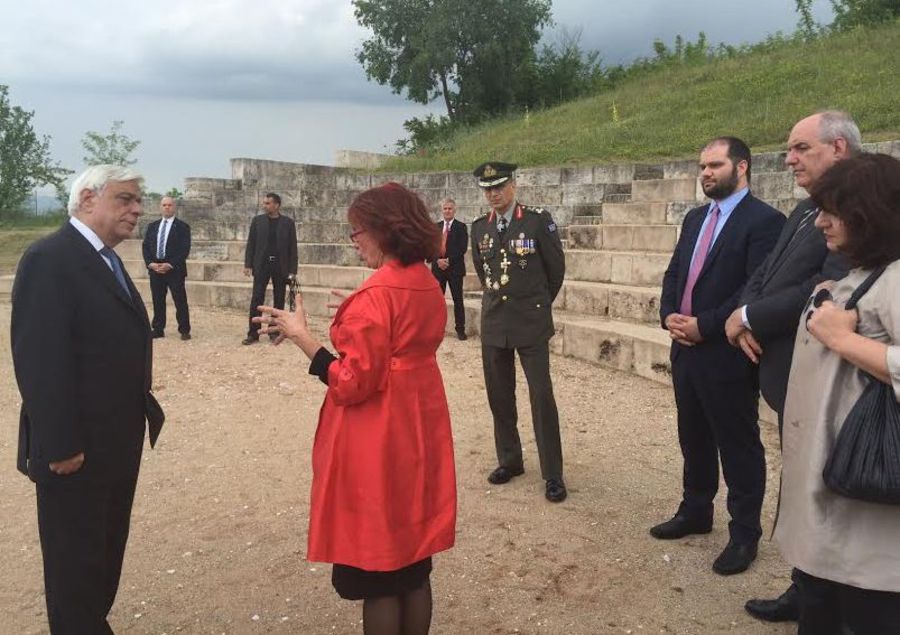 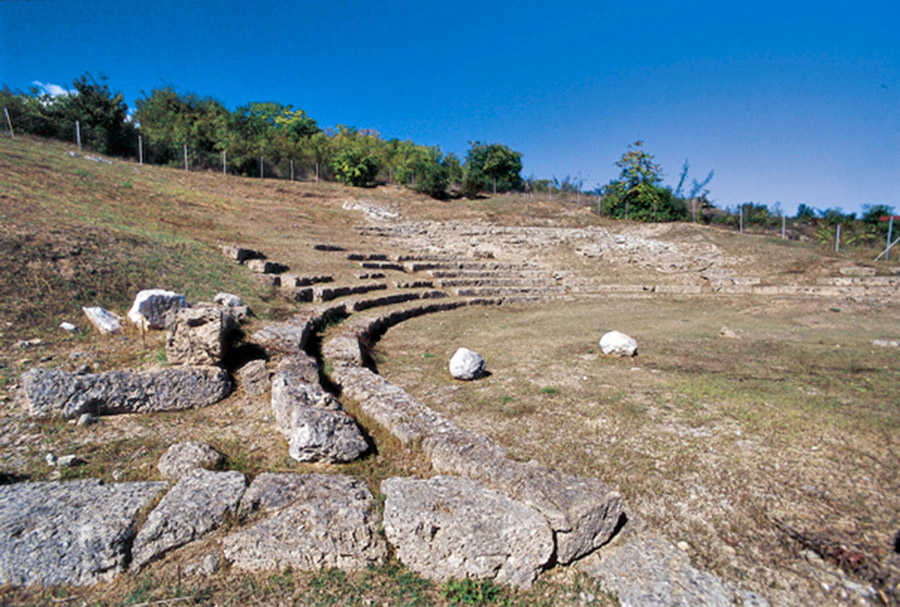 The most significant structure, discovered in the summer of 1922 in the same area, is a theatre of Hellenistic times (2nd c. B.C.) with surviving proscenium and stage wall. Its orchestra has a diameter of 22 meters. The first four rows of seats made of porous rock may be discerned, as well as twelve more rows carved from the soft slope rock. It is calculated to have had a capacity of 1500-2000 spectators.

At a small distance from the Theatre, the Agora of the city (Mieza) is being excavated and the remnants of large public buildings are gradually coming to light, disclosing its significance.

The Macedonian Tomb of Judgment

This is the largest known Macedonian tomb, which came to light by chance in 1954 and was restored structurally just in 1998, while maintenance works on its painted ornamentation are still underway. It is the only Macedonian tomb with a two-floor facade, with alternating Doric and Ionic order. Four Doric semi-columns and two pilasters in the corners support the epistyle and the Doric frieze. Above the entablature and the colorful zone with botanical decorations, the Ionic frieze extends, in which a contest between the Greeks and the barbarians is depicted in relief. This representation probably alludes to the - recent at the time of the tomb's construction-confrontation of the Macedonians with the Persians. On the ceiling, between the six Ionic semi-columns and the two pilasters, seven pseudo-windows have been opened, while only very few parts of the pediment remain. To the interior, the tomb is divided into a narrow, but tall antechamber and the main chamber of the tomb.

The painted representation of the facade is unique; it belongs to the sphere of the religious beliefs of the Greeks and alludes to the Platonic dialogue of Gorgias. It is made up of four autonomous paintings which are found among the Doric semi-columns. To the left of the main entrance of the tomb, in two paintings, there is a depiction of the deceased being led by Hermes Psychopompos (soul-sender) to the Crites (Judges) of the Underworld, Aeacus and Radamanthys, who take up the two paintings to the right of the entrance. The deceased, dressed in a short tunic and chest plate, is the only one who is not referred to by name in the inscriptions, obviously because he was a very well known figure to the society of Mieza. It has been speculated that he was Peukesta of Mieza, the General of Alexander the Great. The metopes are decorated with exceptional painted representations from the mythical battle of the Lapiths with the Centaurs. The ensemble is strongly reminiscent of a screen belonging to an Orthodox Christian temple!

The Macedonian Tomb of Anthemia

The other tomb of the area, the so-called Tomb of Anthemia, was discovered in 1971.This is a graceful, two-chamber monument with an Ionic facade of four semi-columns which support the entablature and the pediment. In the pediment's hollow, a semi-declining couple is depicted in fresco. The three fleuron points which decorate the pediment retain their intense red and blue colours untouched, while the whole vaulted roof of the antechamber is painted with water lilies and fleuron (anthemia) in white and violet tones on a light blue background. The tomb gets its conventional name from these flowers. 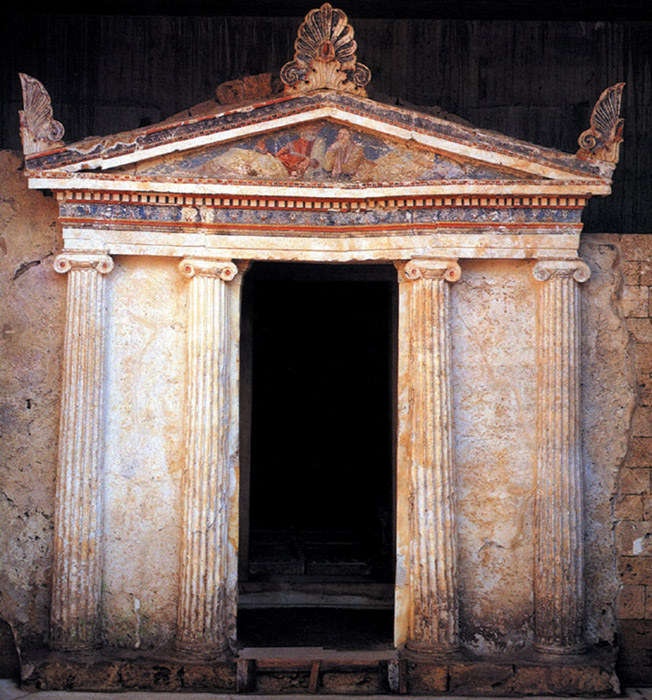 The facade's entrance was blocked by simple stone plinths, while the passageway from the first to the second chamber used to close with a monumental two-leaved marble door, which today we see fallen to the chamber floor. Inside the main death chamber, a four-sided stone base is preserved which contained some kind of metal vessel or reliquary with the bones of the dead. Today's monumental entrance was constructed after the tomb's discovery.

The Macedonian Tomb of Lyson and Kallikles 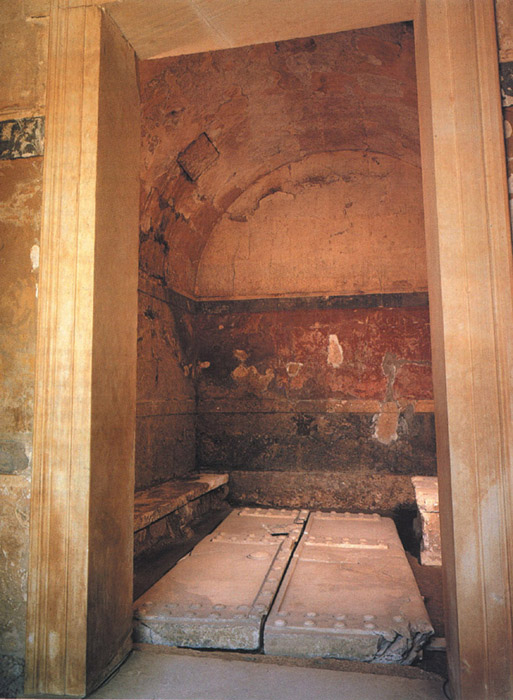 This tomb, which comprises a rare sample of Hellenistic tomb architecture, was discovered in 1942 and is not open to the public, since, in order to protect its unique murals and inscriptions, it still remains completely buried under the ground. It is a simple monument, which dates back to the 2nd c. B.C., and is made up of an arch-covered rectangular chamber and a narrow antechamber with a flat ceiling. People belonging to four generations of the same family were buried here in special compartments in the walls, each marked by their name: Lyson, Euhippos, Kallikles, Sparte, Thessalonike etc. The ashes of the dead were placed in the twenty-two compartments which had previously been opened in the three walls of the chamber. 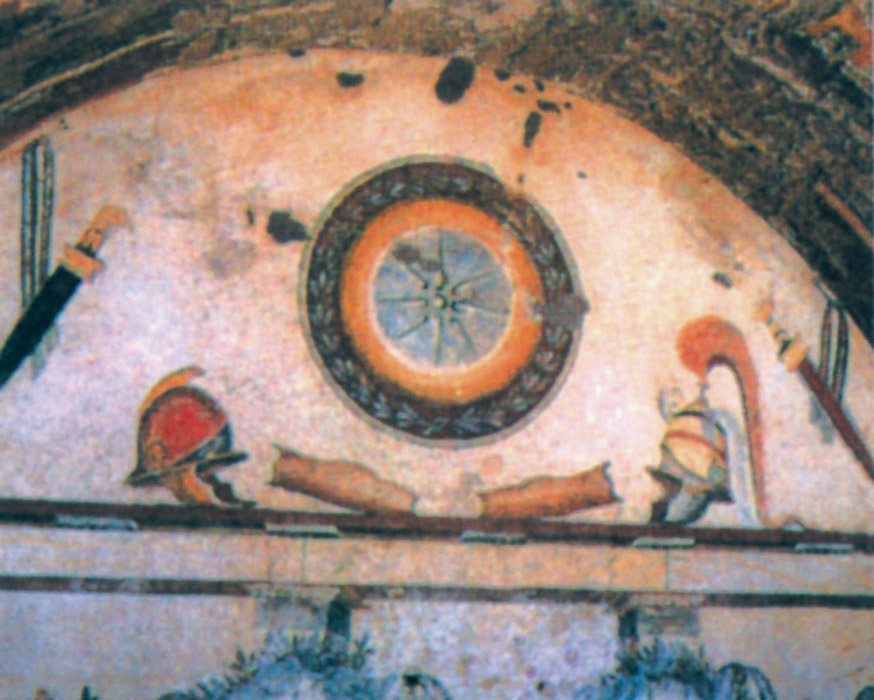 The family members must have held an important place in the military hierarchy of ancient Mieza, as we observe from the military gear which is depicted in the round hollows of the tomb: chest plates, shields, helmets, greaves and warriors' armour accompany the dead at their final resting place. The same armour, in the shape of dozens of silver coins which create a real imbricate chest plate, is still preserved even today in the folkloric happenings of Naoussa.

Named this way for the Dane archaeologist, K. F. Kinch, who excavated it in the late 19th century. It is a small two-chamber tomb with a simple Doric facade. Of the painted decoration which existed in its interior, nothing has survived today. Only from a drawing from the initial publication of the monument may we now see a beautiful mural which represented a Macedonian horse rider attacking a Persian, who, terrified, is trying to escape. The tomb's current state is due to reconstructive work which was performed during the period 1970-1971.